It’s a busy week, as I’m preparing for an APAP showcase performance with Fernando Otero on Friday night (celebrating the upcoming release of our new album “Dual”), and a recital with Taka Kigawa of Bach, Debussy, Schnittke, and Prokofiev on Tuesday the 19th at Spectrum, a relatively new venue in Greenwich Village. And Thursday through Sunday last week I was attending the Chamber Music America Annual Conference here in New York.

Sunday it was warm–nearly 60 degrees. But it was raining most of the day. As late afternoon approached, the skies cleared above Carnegie Hall (down the block from our hotel), and so Mr. Photgrapher and I grabbed the camera, the carbon-fiber cello, and my camp stool, hopped on the subway, and got off at West 4th St., all set to head to Washington Square Park.

And it started raining again. Not just mist, but rain. So we ducked in the coffee shop, had coffee only (Mr. P wouldn’t allow me any pie, and my blood sugar thanks him), and waited for the rain to pass. What a world we live in–we could watch the weather radar on our iPhones. At one point it was just like the good old days in Tampa: it was sunny and raining.

Finally we were able to walk down to the park. The wet pavement was gorgeous, it was still cloudy, and I was in the mood for the Bach D Minor Suite:

Funny how the world had turned black and white! Well, actually that was a photo-editing filter. As the sky continued to brighten, more people walked by, a few stopping to listen for a bit. 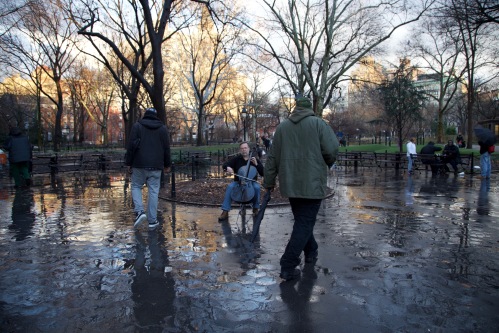 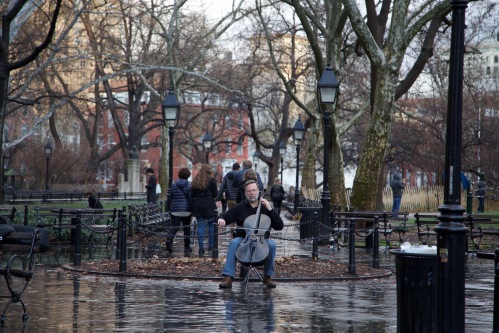 I had texted my daughter, who wrote back: “Go play in the fountain.” So we went over to the (waterless) fountain, and I climbed on in. Playing here was fantastic–an actual audeince developed, and it turned into a concert! Of course, the photos are taken with me facing the camera, and most of those who were listening were facing me as well. 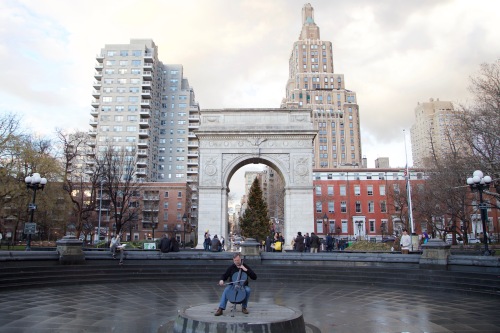 Someone posted a beautiful black-and-white photo of me on Instagram (that’s #celloeverywhere, folks). Mr. Photographer had taken almost the exact same shot: 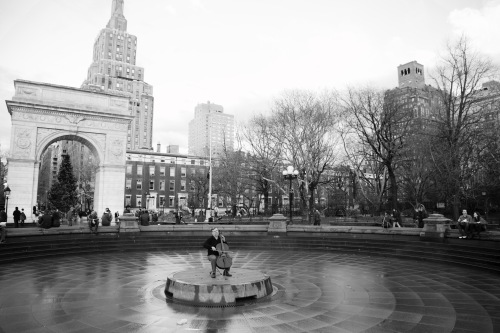 There was something magical about sitting there–circles are powerful. And the acoustic was great, at least for me.